The country that hates nature

I have just established a new blog and the address is ENDSJO.xyz. All new articles will be posted there, and gradually all the old ones too. In addition there will be info on books, scholarly articles, interviews and other. You are welcome to follow me.

There is no reason to be surprised by Norway’s recent decision to kill more than two thirds of its critically endangered wolf population. The country has a consistent policy of prioritising agriculture, economy, and a culture of hunting species to the brink of extinction, which leaves little space for wildlife. The lush and picture perfect tourist images of fjords and mountains, which Norway so diligently uses to sell itself, is in fact a depleted landscape shaped by the Norwegians’ hatred of their own nature. 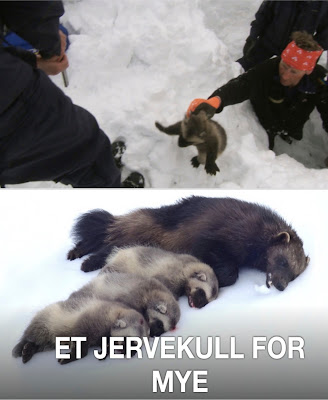 Fun the Norwegian way. First take the wolverine pups out of their den. Then shoot them, one by one, together with their mother (Screen shot from NRK.no). The article is a revised version of my article originally published in Norwegian on NRK.no.

Norway has long championed large scale hunting of all of its endangered mainland predators. Wolves are simply not allowed outside a narrow land strip close to the south-eastern border to Sweden, and even here they may be shot if they threaten domestic animals. The threatened populations of lynxes, bears, and wolverines, are also decimated on a regulated basis. Eager hunters volunteer by the thousands when hunt is allowed. When it comes to wolverines, the government is not content with the number killed by diligent hunters, so every year wildlife officials slay mothers together with their pups in their dens. At times animals are taken down without doing any harm at all, as when Deputy Minister in the Ministry of Climate and Environment, Lars Andreas Lunde, ordered a young bear to be shot after he had been contacted by a concerned friend and farmer from his own Conservative Party.

All of Western Norway, where tourists flock to experience what is presented as pristine nature, is completely off limit for any land predators. Here they have all been made completely extinct and the government sees to that it remains so. The fortunate visitors may spot the mighty golden eagle, but probably not for long, as the Norwegian parliament just opened up for the hunting of this species too.

The direct reason for the official massacres of predators is a small number of heavily subsidized farmers who insist on their right to use large tracts of Norwegian wilderness as grazing land for about two million completely unsupervised sheep. As no one takes care of the generally helpless sheep, they die by the tens of thousands from parasites, poisonous plants, drowning, being caught in fences, accidents in the mountainous landscapes, and traffic. The farmers have nevertheless managed to convince all governments that the small number of sheep taken by wild animals, necessitates that all predators are to be more or less eradicated.

The Norwegian ideal is a landscape completely bereft of predators, an eco-system in complete imbalance, where only humans are allowed to kill anything at all. This, of course, is no natural state, but more the reflection of a Disney utopia or a Biblical scenario of the end time, when all animals behave like docile pets. Nature is simply not to be left alone.

The general attitude
The harsh policies against Norwegian predators are mirrored in how other animals are treated. Every year thousands of porpoises, seals and sea birds are killed and just dumped into the sea by the fishing industry, quite legally. Even though the population of ptarmigans grouse has recently collapsed, the bird is still legal to hunt for most of the year. Any diligent hunter is even free to exterminate the bird species from whole areas, as happened in 2015 on the island of Sula. As the bird has become so scarce in most parts of the country, hunters flock in such numbers to Northern Norway, where the bird population has gone down with “just” two thirds, that it even led to numerous delays at airports as the 2016 hunt commenced.

Norway still keeps on defying the International Whaling Commission, by insisting on harpooning minke whales. As hardly anyone wants to eat whale meat anymore, a large portion goes to feeding animals in fur farms. The heavily subsidized hunt is all about tradition, governments of every stripe insist, pointing with pride back to a not too distant past when Norwegian whaling ships plied every ocean putting almost all whale species to the brink of extinction. 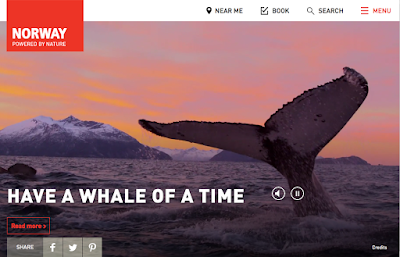 In Norway you can more than just watch the whales frolicking in the ocean. You can also enjoy seeing them killed (Screenshot from VisitNorway.com).

Nothing is sacred in the Kingdom of Norway, not even the celebrated fjords themselves. Whereas other countries bemoan underwater ecosystems collapsing due to climate change, the Norwegian Environment Agency, after severe pressure from the government, has given the green light for the dumping of mining waste in the pristine Førde Fjord, something that will probably annihilate virtually all life there.

Indifference, dislike and hatred
Although there is opposition to the hate of nature among environmental and animal rights groups, and the smaller Liberal, Socialist Left and Green Parties, that the song I Hate Seagulls is a modern classic in Norwegian music mirrors the general attitude towards species that in any way may annoy anyone. The more general attitude towards wild animals goes from indifference, to dislike and outright hatred. When Norwegian media writes about the fishing of the endangered Atlantic bluefin tuna, it is all about the fishermen’s joy of enormous catches and the money they earn. While a 2016 TV program about sea birds drew large audiences, most people do not care that many of the same birds are threatened because of the depletion of fish caused by Norwegian fisheries. That seagulls are now also endangered does not keep them from still being killed because of their noise and other unpopular habits. While bishops have sent messages of supports to demonstrators who want the complete annihilation of predators, politicians of major parties are found donning t-shirts proclaiming that “Norwegian nature is wonderful – without wolves”.

Odd, the Norwegian government has long combined its native politics of extermination with generous largesse towards the environment in other countries, like giving Brazil, Guyana and DR Congo great sums to preserve their rain forests. The basic message of Norway, however, remains the same: When one of the richest countries in the world does not feel it can afford to protect its own nature, why should anyone else?
Lagt inn av Dag Øistein Endsjø kl. 19:56