When the obvious becomes difficult

It is just not herself the wonderful, bearded, heavily made up Conchita sings about, when she proclaims “you can’t take your eyes oh-oh-oh-oh-off me, ’cause I’m different and my mind is free.” She sings about it all. We are all different in our own way. This is about you and me. 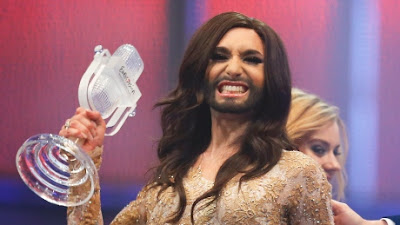 “That’s what I am, that’s what feels good to me.” Few things may seem more obvious. “Nothing will change me, that’s what I’m meant to be.” This was the message of the greatest hit of Conchita Wurst, until she was chosen by Austria to represent the nation in the Eurovision and won it all. But when Conchita is singing these platitudes, the obvious suddenly become difficult and controversial for many people – just because the message about being yourself is performed by a bearded man with perfect make up, wavy long hair, and the most exquisite dresses.

In both Russia and Belarus petitions were launched in order to boycott the Eurovision because of the mere presence of Miss Wurst on the screen. In Armenia did Conchita play a prominent role in the heated debate whether the country should drop an association deal with the EU and instead strengthen the formal ties with Putin’s Russia. The bearded drag artist was used as an example of all the horrors Europe represents. Many people have the opinion that Conchita has no right to be herself. She has at least no right to be treated as others because of the way she expresses herself. She should be discriminated, sanctioned, made invisible.

By here mere presence, Conchita thus demonstrates the very essence of what human rights are all about. Through the way she is so viciously attacked, she reveals some of the intense hatred LGBT persons today are countered by though legal frameworks and harassment in many countries in Europe and other places. Not that those countries that are more tolerant today have a long history of tolerance to look back on either.

When it comes to LGBT persons, it is often the visibility many hate the most. Even Armenia, which went into tantrums because of Miss Wurst, has sent a couple of gay Eurovision participants without causing any scandal in the home country – because these artitsts were so discreet that hardly anyone outside of Armenia’s own LBGT community had any idea of what they really were. Similar artists have represented a number of other Eurovision countries known for their less than tolerant stand on LBGT issues. And we must not forget that the same Putin regime that now are so proud in their homophobia, in 2003 sent the faux lesbian duo t.A.T.u. to the Eurovision, and it was everybody else who denied the girls kissing each other on stage, as they frequently and heavily did in their popular videos. Even today the picture is far from black and white. The popular vote in Russia, Belarus, and Azerbaijan all had Conchita in their top 4, only to be pulled down by more negative juries. In Armenia the people wanted Miss Wurst as the runner-up, while in neighbouring Georgia both jury and the popular vote agreed on her being next best.

More directly, Conchita Wurst represents a very tiny minority. Even among transgender people is such a spectacular mix of gender expressions rare. But if we look closer at Miss Wurst and her message, we realize that she most of all represents us all.

It should have been no question at all about Conchita being respected for being the way she wants herself. Alas, this is still not the case. But by how her mere presence triggers a minefield of hate and prejudice, she is fighting for us all. With her own struggle, Conchita makes it easier for everyone of us to be ourselves, whether it is women with hijab, politicians in wheelchairs, butch lesbians, straight male middle-aged professionals, or whatever we are or want to be in our immense human diversity.

It is just not herself the wonderful, bearded, heavily made up Conchita sings about, when she proclaims “you can’t take your eyes oh-oh-oh-oh-off me, ’cause I’m different and my mind is free.” She sings about it all. We are all different in our own way. This is about you and me.

This is a translation of my article that first was published in Norwegian in the newspaper Bergens Tidende.
Lagt inn av Dag Øistein Endsjø kl. 09:36